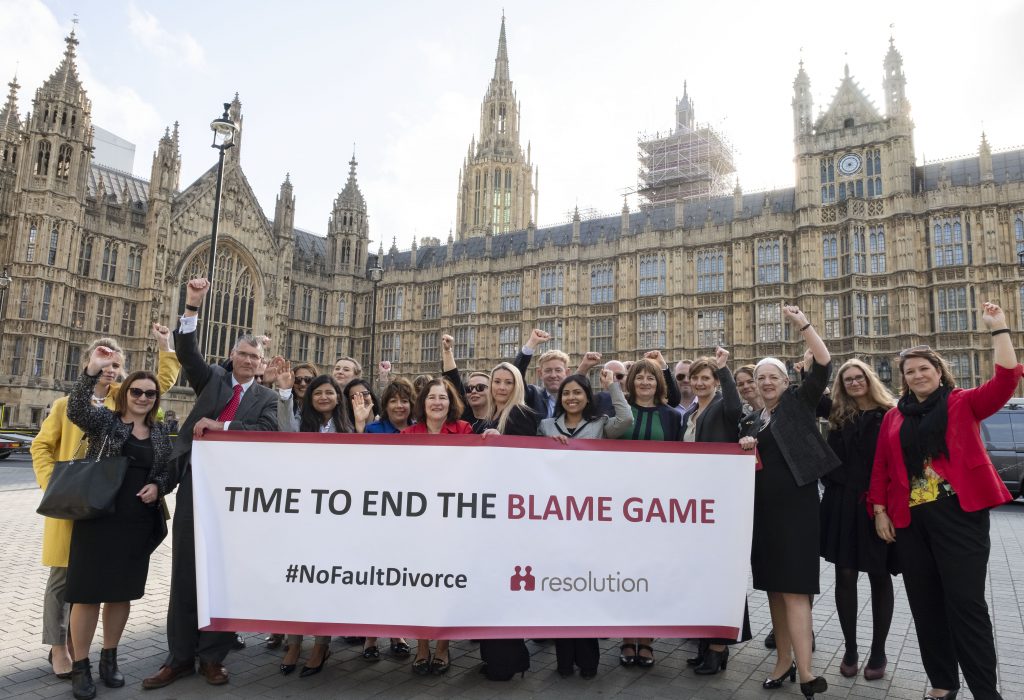 Members of Resolution, the family justice body, made the call on the same day the Supreme Court is due to hear the landmark case of Owens v Owens, where a woman has been denied a divorce, on the grounds that her husband’s behaviour was not deemed ‘unreasonable’ enough for the purposes of the divorce petition.

Resolution was also granted exclusive permission to intervene in the case on behalf of Mrs Owens, arguing that the current law can be applied in a way that allows her the divorce she is seeking. However, the organisation claims that irrespective of the outcome in the Supreme Court, the law should be changed to avoid such cases coming before the courts in the future. They will be joined outside Parliament by representatives of Relate, One Plus One and University of Exeter Professor Liz Trinder.

In a new survey of professionals by Resolution, 9 out of 10 agreed the current law makes it harder for them to reduce conflict and confrontation between clients and their ex-partners.

· 67% said the current law makes it harder for separated parents to reach an amicable agreement over arrangements for children.

· 80% believe the introduction of no-fault divorce would make it more likely for separated couples to reach an agreement out of court.

· 60% have experienced lawyers drafting more aggressive petitions than before the Court of Appeal judgment in Owens v Owens.

In 2016, more than half of all divorce petitions were submitted on the basis of adultery or behaviour – meaning over 60,000 people apportioned blame to their ex-partner for the relationship breaking down. Many, the body claims, did not have to.

Resolution has campaigned for no-fault divorce for decades, and their call for reform has recently been echoed by the Marriage Foundation, the President of the Family Division, and the new President of the Supreme Court.

“Our current laws can often create unnecessary conflict in divorce, forcing many couples to blame each other when there is no real need – other than a legal requirement – to do so. This conflict is detrimental to the couples themselves, and, crucially, any children they may have.”

“We want to see a system fit for the modern age, where separating couples are treated like responsible adults, and are allowed to resolve their differences as amicably as possible without having to sling mud at each other. It is ridiculous that Mrs Owens has to come to the highest court in the land in order to escape a loveless marriage.

“The Government needs to grasp the nettle and end the blame game.”

“There is no evidence that fault acts as a buffer to slow the divorce process, and the petition plays no part in determining other factors, such as financial arrangements or what happens to any children the couple may have.

“The current system is outdated, unfair, and unnecessary. It’s high time that we brought more maturity and transparency into the divorce process.”